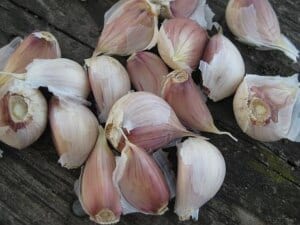 In this article we talk about 10 health benefits of garlic, well known from ancient times. Well, garlic is associated with the genus Allium and is almost related to the onion, rakkyo, chive, and shallot. The human being has been using garlic for more than thousands of years not only as a cooking material but also as a medicine. In ancient Egypt, garlic has used for culinary purposes, and got therapeutic benefits. It holds curative as well as medicinal components because of the presence of antibacterial and antiseptic character. The potential components of garlic are just because of the compound Allicin. Garlic is full of minerals like phosphorous, zinc, potassium, and magnesium. There is plenty of vitamin C, thiamine, vitamin K, niacin, and folate available in garlic.

A Short History of Garlic

All most of the whole world garlic has been used for thousands of years. When the Giza pyramids were constructed garlic has been started to use in different activities. The ancient Greek physician Hippocrates, today is known as the father of western medicine, usually prescribed garlic in different conditions of illness. Later on, Hippocrates increased the use of garlic and use in respiratory problems, poor digestion, fatigue, and even in parasites.

In ancient Greece, garlic has suggested to the original Olympic athletes to increase the performance. Garlic was spread from ancient Egypt to the advanced ancient civilizations of the Indus Valley (today known as Pakistan and western India). Then it headed to the way of China.

According to England’s royal botanical center of excellence, the ancient people of India gave enormous priority to the therapeutic properties of garlic as well as they thought it to be an aphrodisiac. But the upper-class people avoided garlic.

The history of the Middle East, East Asia, and Nepal indicate that garlic has been used to the treatment of high blood pressure, liver disorder, bronchitis, intestinal worms, diabetes, TB, flatulence, fevers, and dysentery. It seems that the ancient civilizations knew well the health benefits of garlic.

If you don’t love garlic, you can use products that contain a good percentage of garlic in their composition to get some health benefits of garlic as well. For a detox cure, you can use a product like this, called Tox-Flush, which contains garlic.

What Are the Health Benefits of Garlic?

According to research conducted by the Jiangsu Provincial Center for Disease Control and Prevention in China, if people ate raw garlic twice a week for 7 years then the risk of lung cancer will minimize by 44 percent.

Here the researchers conducted a face to face interview of 1424 lung cancer patient and 4553 healthy people. The people were asked about their lifestyle, habit, diet, as well as smoking and how often they ate garlic. The researchers asked them about some issues like their smoking habit, lifestyle, diet plan, and how frequently they usually ate garlic.

Raw garlic has the power to minimize cough and cold infections. To get the maximum benefit someone should eat two crushed garlic cloves on the empty stomach in the morning. Even you can hang garlic cloves around the neck of kids and babies which will relieve babies from congestion symptoms.

Garlic develops brain functioning because it has anti-inflammatory along with antioxidant properties which are mostly responsible for proper brain functioning. It works better against neurodegenerative diseases like dementia and Alzheimer’s.

There are so many people who are continuously suffering from digestion problems. So, the digestion problem will be improved with the intake of raw garlic in the morning. It improves the intestine and minimizes inflammation. The intestinal worm can be reduced by eating raw garlic. The raw garlic demolishes the bad bacteria and preserves the good ones in the gut.

A team of researchers at Emory University School of Medicine found that at the time of heart surgery and after a heart attack, a component of garlic called diallyl trisulfide helps to save the heart. They also said that it may be used as the treatment of heart failure. It’s well known the health benefits of garlic for heart diseases.

The blood sugar fluctuates in those who have diabetes so, with the consumption of garlic the blood sugar may remain at a standard level.

You can get multiple health benefits even garlic can reduce acne and lightens acne scars. The proper application of garlic, cold sores, psoriasis, rashes, and blisters can all be benefited. It also works against UV rays and protects from aging.

Millions of people are suffering from different types of diseases due to heavyweight. Here garlic can play an important role in losing weight because garlic minimizes the assertion of genes which is the reason for the formation of adipose cells that accumulate fat. Garlic also rises the thermogenesis in the body and increases the chances of burning fat and reduce bad cholesterol.

Increasing immunity is badly needed for all people because lower immunity can lead to the chance of being affected by different diseases. Garlic will shield against free radicals and save damage to the DNA. Garlic has a huge amount of zinc which leads to increase immunity. It has the amount of vitamin C and antimicrobial properties that can be beneficial against eye and ear infections.

Overall, garlic is a very common material in every cooking room. So, eating some cloves of garlic can prevent you from a number of diseases.

For more details about the health benefits of garlic, you can read this article and for more products or articles about health and fitness visit us.

This website uses cookies to improve your experience while you navigate through the website. Out of these cookies, the cookies that are categorized as necessary are stored on your browser as they are essential for the working of basic functionalities of the website. We also use third-party cookies that help us analyze and understand how you use this website. These cookies will be stored in your browser only with your consent. You also have the option to opt-out of these cookies. But opting out of some of these cookies may have an effect on your browsing experience.
Necessary Always Enabled
Necessary cookies are absolutely essential for the website to function properly. This category only includes cookies that ensures basic functionalities and security features of the website. These cookies do not store any personal information.
Non-necessary
Any cookies that may not be particularly necessary for the website to function and is used specifically to collect user personal data via analytics, ads, other embedded contents are termed as non-necessary cookies. It is mandatory to procure user consent prior to running these cookies on your website.
SAVE & ACCEPT
Scroll to Top